40th anniversary of priestly ordination of Rector of the Perervinsky Seminary

On June 12th 2015, on the celebration day of St. Isaac the confessor, abbot of the Dalmatia Monastery, rector of the churches of former St. Nicholas Perervinsky Monastery, Rector of the Perervinsky Seminary – Archpriest Vladimir Chuvikin celebrated the 40th anniversary of priestly ordination.
Divine Liturgy at the Cathedral of St. Nicholas Perervinsky monastery was headed by Archbishop Filaret (Karagodin) concelebrated by bishops of the Russian Orthodox Church, the clergy of Moscow, as well as the rector of the St. Sergius church  in Johannesburg, Archpriest Danil Lugovoy.
At the end of the liturgy, thanksgiving service was performed. Bishop of Voskresensk, Savva addressed the Archbishop welcomed and conveyed greetings of His Holiness Patriarch of Moscow and All Russia Kiril. In response, the Archpriest Vladimir thanked all the guests who came from different parts of Russia, including the Far East and even from Africa, for their righteous work and to share the joy of the celebration.
The celebration continued in an informal atmosphere in the refectory of the monastery, there were words of congratulations and thanks, as well as spiritual and folk songs. 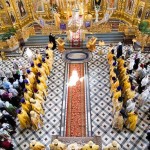 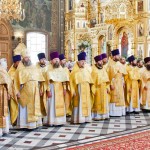 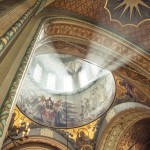 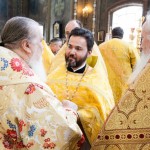 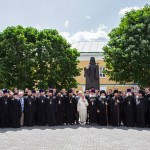