On November 5th, 2015, His Holiness Patriarch of Moscow and All Russia Kirill attended the opening and plenary session of the 5th World Congress of compatriots living abroad.
The event was held in the Congress Hall of the World Trade Center in Moscow.

The guests were welcomed by the Minister of Foreign Affairs of Russia, SV Lavrov and Chairman of the Federation Council of Russia, VI Matvienko.

Thereafter the participants of the Congress were addressed by the Primate of the Russian Orthodox Church.

After a break, the plenary session was attended by Russian President, VV Putin.

In his speech, the head of state, in particular, noted: “We see that the Russian Orthodox Church and other traditional faiths are playing a more and more significant role in the expansion of humanitarian ties with our Russian compatriots. The Russian collective abroad is always a united group of people from different nationalities and religions. It is very important that today you solve common problems together, and the challenges facing our country.”

The Congress, which takes place in Moscow on 5th-6th November, is dedicated to the 70th anniversary of Victory in the Great Patriotic War. The event was attended by about 400 representatives of Russian communities from 97 countries, including bishops and priests of the Russian Orthodox Church, carrying out their service abroad.

Among the participants i n the forum: the Chairman of the Department for External Church Relations of the Moscow Patriarchate, Metropolitan of Volokolamsk Ilarion; Bishop of Korsun, Nestor (France); Head of the Moscow Patriarchate in Foreign Institutions and Administrator of the Patriarchal Parishes in Italy, Bishop Bogorodsky Anthony (Italy); DECR Vice-Chairman, Archimandrite Filaret (Bulekov); DECR secretary of countries abroad Archpriest Sergiy Zvonarev; representative of the Patriarch of Moscow and all Russia at the Patriarch of the Great Antioch and all the East Abbot Arseny (Sokolov) (Lebanon); Secretary of the Hague and the Dutch diocese Archpriest Gregory Krasnotsvetov (Netherlands), Rector of the Patriarchal Monastery in Dublin Archpriest Michael Nasonov (Ireland), Rector of St. Sergius of Radonezh in Johannesburg, Archpriest Danil Lugovoy (South Africa), Rector of St. Job of Pochaev in Buenos Aires priest Oleg Zabusen (Argentina) and others. 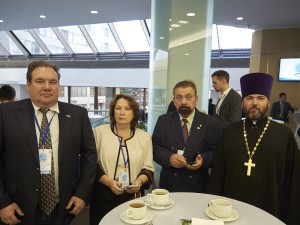 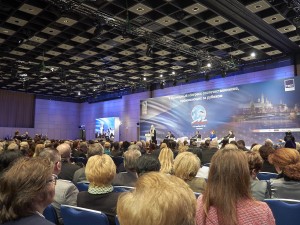