On May 8th-10th, commemorative events were held in South Africa dedicated to the 70th anniversary of Victory Day.

On May 8th, a reception in Pretoria was hosted by the embassies of Russia, Belarus and Kazakhstan, dedicated to the 70th anniversary of Victory in the Great Patriotic War, which was attended by Father Danil Lugovoy and members of the church of St. Sergius of Radonezh in Johannesburg.

On Victory Day itself – Saturday May 9th – in the church of St. Sergius of Radonezh a Divine Liturgy was celebrated, and then in the chapel of holy apostle like Prince Vladimir – a thanksgiving prayer to the Lord God for the victory and funeral lithium was carried out.

On Sunday May 10th, at the church of St. Sergius prayers were said «for our soldiers, who gave their lives for us on the battlefield, for those who died from wounds and famine, for those who were held captive and worked in bitter conditions and for those innocently tortured and murdered, and laboured for the sake of the victory.»

After the end of the service on the area in front of the welcome centre a festive concert was prepared. Before the festivities started, words of welcome were given by the Russian Ambassador to South Africa, Mikhail Ivanovich Petrakov. The concert program consisted of performances by students of the school at the Embassy of Russia, a dance performance of the Serbian community in Johannesburg, and parishioners of the church: Irina Lynovoy, Elena and Anastasia Rakityanskaya. Presentations were made by veterans of the Great Patriotic War, Valentin Pavlovich Arinin and Tsiliya Abramovna Mayburd, they congratulated everyone on this great day of victory and told their stories about the difficult years encountered during the war. Father Danil, on behalf of all parishioners warmly congratulated the veterans on Victory Day and presented flowers and gifts.

In the Parish centre, with the participation of Russian Cooperation an exhibition was organised illustrating the «Russian Orthodox Church during the war.»
Then there was a festive meal. 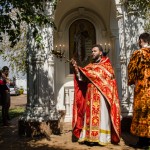 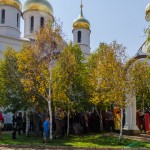 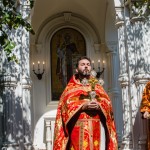 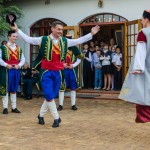 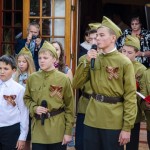 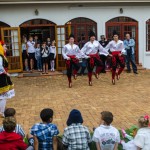 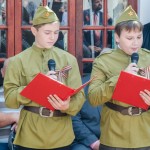 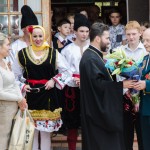 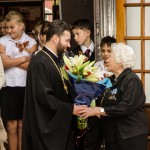 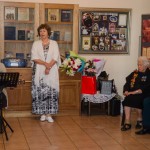