On the 22nd of March 2014, on the remembrance of the 40 martyrs of Sebstain, the Rector of St. Sergius of Radonezh in Johannesburg, Danil Lugovoy, conducted the Divine Liturgy in the Greek church of St. Raphael located in the residence of the Archbishop of the Cape of Good Hope, Sergius. After the sermon, Archbishop Sergius welcomed all who gathered and called for everyone to accept their spiritual life in the seven days of lent which were to follow. As a gift to the Russian church in Johannesburg, His Eminence presented frankincense from the Holy Mount Athos. More than 40 people were invited to pray together at the Divine Liturgy service.

Accustom to tradition and after the conclusion of the Divine service, conversations arose about the Orthodox faith over a cup of tea.

Later that day, Father Danil made the sacrament of anointing (Holy Unction), where 30 people participated.

The following service in the Slavonic language of the church will be held in Cape Town on Saturday the 24th of May this year. 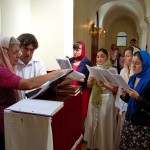 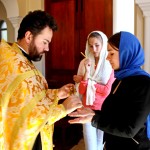 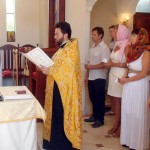 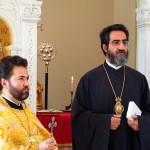