Anniversary of the eldest parishioner of St Sergius Church 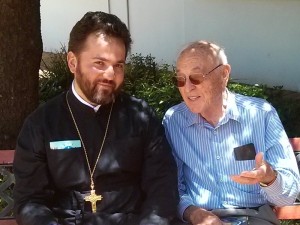 In February 2014 the eldest parishioner of St Sergius Church – Nikolya Yalle turned 90. On Sunday the 16th of February after the Rector priest Danil Lugovoy and the parishioners warmly congratulated the dear birthday boy. In the name of all the gathered, father Danil presented Nikolai with a folding icon of the Nativity of our Lord, God and Saviour, Jesus Christ and wished good health and Gods help. Nikolai Yalle was born in 1923 in the city of Berlin, where his parents moved to after the revolution from Kovno (at that time the capital of Lithuania, now Kaunas). He graduated from school in Paris and further lived with his family in Spain. In the beginning of the 1950s he moved to South Africa. He stood at the roots of the Russian-speaking Orthodox community and was an active member of the parish in the name of Saint, Equal to Apostles, Prince Vladimir in Johannesburg.