On January 15th, on the remembrance day of St. Seraphim of Sarov in the church of St. Sergius of Radonezh in Johannesburg – Archbishop of Johannesburg and Pretoria Damaskinos traditionally conducted the Divine Liturgy, assisted by the Rector of the Russian Orthodox Church, Danil Lugovoy.

After the end of the service Father Danil warmly welcomed Bishop Damaskinos and presented him a icon on behalf of the entire congregation. The icon depicted the Holy Trinity, St. Sergius of Radonezh and St. Seraphim of Sarov.

During the meal after the service, the Archbishop Damaskin told the congregation about the upcoming visit to South Africa, of His Beatitude Patriarch of Alexandria and All Africa, Theodore II, and invited everyone to take part in the festivities. The occasion would be the 10th anniversary of the enthronement of His Beatitude. 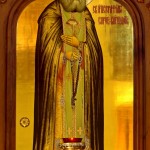 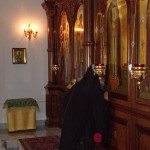 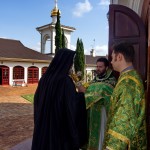 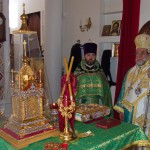 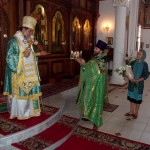 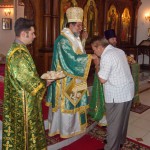