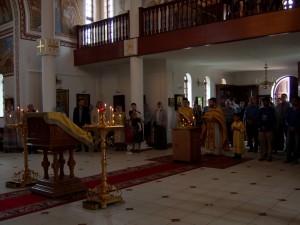 In St. Sergius Russian Church on the 2nd of March on Forgiveness Sunday during the Divine Liturgy a prayer to upkeep the peace in Ukraine was held for terminating hostility and hatred. Also the prayer was meant for those who died in fratricidal conflict. After it Vespers Ceremony of Forgiveness was held.