Church of the St. Sergius was visited by members of the South African Museum Association (DITSONG) 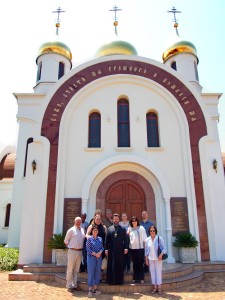 On the 31st of October the church of St. Sergius of Radonezh in Johannesburg was visited by members of the South African Museum Association DITSONG, which forms a part of six major museums in Pretoria and Johannesburg. Guests included restorers, architects and scientists were met by the Rector of the church Rev. Danil Lugovoy. He showed them the church interior and exterior, explained the history of the church and how the congregation was formed, the construction of the church, the symbolism of Orthodox architecture, icon painting and church services. Discussions continued during tea held at the church’s welcome center. Father Danil responded to questions raised by the South African museum workers many of which were for the first time under the arches of the Orthodox Church. Of particular interest was the history and contemporary practices of creating icons.