On Wednesday the 26th of June the Hegumen of St. Sergius of Radonezh Rev. Danil Lugovoy performed a memorial service at the grave of Lieutenant Boris Aleksandroivich Strolman, who was buried in the city of Pretoria the capital of RSA.

On Wednesday the 26th of June the Hegumen of St. Sergius of Radonezh Rev. Danil Lugovoy performed a memorial service at the grave of Lieutenant Boris Aleksandroivich Strolman, who was buried in the city of Pretoria the capital of RSA.

Born in Moscow in 1872 Boris Aleksandroivich Strolman served on a cruiser “Prince Pozharskiy” together with the future admiral Aleksandr Kolchak. He purposefully retired, like many others, to go and fight voluntarily for the Boers.  “The eternal thirst to seek justice and aspiration to protect the weak is what brought the Russian people to South Africa”, noted defense attaché N.V. Pushistov in his speech before the service for the commemoration of the dead. Boris Aleksandroivich participated in the most active episodes of war, everyone spoke of him as a spectacular man of courage. After occupying Pretoria, when almost all the volunteers either fled or were held in captivity by the English, he helped the Boers in guerrilla warfare. Boris died in battle near the city of Lindsley. A bullet struck him down when he was returning to the field of battle after he carried out a wounded comrade. In March 1906 his remains were reburied in Pretoria, where on that day for the first time an Orthodox prayer was read at his grave.

By the courtesy of the Russian embassy in RSA a wreath was laid upon B.A. Strolmans grave. In his word to the gathered people on this day at the historical Pretoria cemetery the Ambassador of Russian Federation  in RSA Mikhail Ivanovich Petrakov called to “honour the memory and never to forget of great Russian doings left here by our fellow countrymen.” “There must not be any unknown soldiers. Every heroic deed must be immortalized.” – underlined defense attaché in RSA Nikolai Viktorovich Pushistov.

Currently by the blessing of His Holiness Patriarch of Moscow and all of Russia Kirill on the territory of Sergies Church a Chapel is being erected in remembrance of Russian volunteers who died  in the first war of the 20th century. The blessing of the Chapel will take place in October this year at the time of festivities, dedicated to the 10th anniversary of the church blessing. 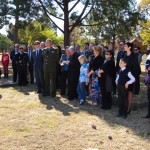 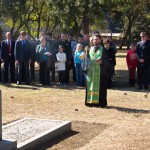 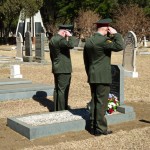 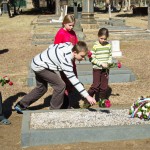