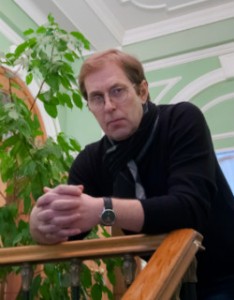 George Kirs was born on the 18 of May 1959 in the city of Leningrad. In 1982 he started working professionally as a sculptor, restorer and woodcarver at the Ekaterina’s Palace in the city of Pushkin.

In 1991 he completed an architectural degree at the Leningrad Construction and Engineering institute.

From 1989 to 1995, he worked with design organisations including “Lengrazhdanproect” and “TST”.

During this time a series of projects including living quarters and office parks were accomplished in the cities of Kirovsk and Otradnoe, as well as the department store “SITOP” in Finland.

In 1996 he formed his own company: “Eidos Architectural Production Studios” where he holds the post of Manager and Chief Architect to the present day, with the restoration of Monuments eventually becoming the company’s main line of work, specializing in church architectural design.

In the period from 1996 to 2005, over 20 projects were accomplished which contained restoration and reconstruction of Monuments of federal magnitude in St. Petersburg, and also in foreign countries.

The more significant of these projects were:

As an active participant of church architecture & restoration exhibitions in Russia and abroad, Kirs was honoured with the Order of St. Daniel of Moscow for his architectural designs for the church of St. Sergius of Radonezh in South Africa. 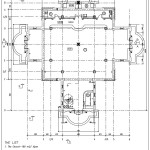 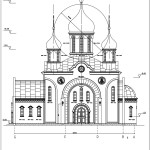 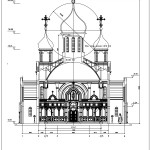 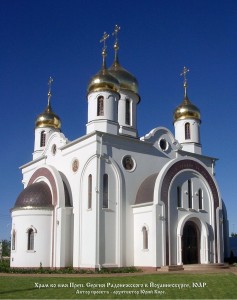 The Church fulfils a need for the spiritual support of emigrants from the Commonwealth of Independent Countries who now reside in the Republic of South Africa. These emigrants are now able to experience a spiritual and cultural link with their Motherland.

The appearance of the Church is supposed to reflect the wealth of ancient cultural Orthodox tradition. For this reason, the famous architect Yuri Kirs, from St. Petersburg, was asked to design this masterpiece. He is well known for his architectural work on the restoration of the Cathedral of the Vladimirskaja Icon of the Mother of God, the Holy Trinity Alexander Nevsky Lavra, the St. Xenia Chapel in the Smolensk cemetery and the restoration of the iconostases and churches of the Holy Transfiguration Valaam Monastery.

The design of the Church harmoniously combines elements from various Russian architectural schools namely: the Vladimir-Suzdalsky, the Moscow and the Saint Petersburg schools. But these historical methods were rethought and synthesized by the architect resulting in an artistic masterpiece. 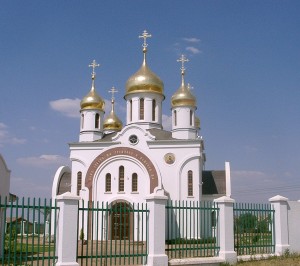 The church conveys a feeling of perfect balance and proportion, which is a strong characteristic of the Vladimir-Suzdalsky school. The graceful, light proportions, a rich variety of architectural forms as well as the combination of the white walls with the golden cupolas, which are reminiscent of the Annunciation Cathedral in the Moscow Kremlin; all these give the church a festive and graceful appearance.

An unusual architectural design is used in the construction of the six round towers. The façade of the building incorporates original portals, in which can be seen elements of Byzantine architecture. The arches of the pediments resemble those of the St. Xenia Chapel in St. Petersburg. The logical completeness of the design ensures that the apse of the Church is also enclosed within the frame of an arch. Unexpectedly, the cornices include Dutch frescos that remind you on one hand of early Petersburg buildings, but on the other hand, of the Boer heritage in the culture of South Africa. The Church’s smooth corners are unequalled in contemporary architecture; the rounded “philenoks” echo the rhythm of the façade, lengthening the outline of the Church, strengthening it as it reaches towards the heavens. This effect enhances the height of the windows, a characteristic of Russian architecture. 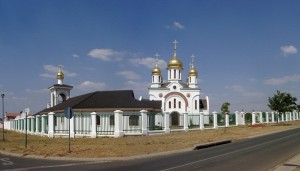 The interior of the Church is far more spacious than it appears from first impressions. The large central dome dominates the interior, with only slender columns in the Byzantine style to support the central cupola. Windows in the central tower reflect sunlight on to the white walls, which illuminates the whole interior. The dark wood partition (iconostasis) separating the altar is made in early Byzantine style. The splendid Tsar gates are finished in the baroque style of Moscow in the 17th century. It is a rare honour for the Church to grant the architect the freedom to create completely original work. It is his use of historical context in combination with all the techniques of modern architecture that has created a masterpiece of rare and precious beauty.

The dazzling and joyous appearance of the Church, with its golden cupolas glittering in the South African sun, stretches out an invisible spiritual thread from its crosses to those of the Church of the Holy Trinity St. Sergius Lavra in distant Russia, to the glory of the Orthodox faith.

This article first appeared in the journal “ARCHI-technology” in November 2004 and is reproduced here by kind permission of the publishers – Brooke Pattrick Publications (Pty) Ltd and personally by Mr. Gerald Garner.

The gold-leaf-covered onion domes of a Russian Orthodox church are not a sight one expects to see when driving through the ever-developing area of Midrand on the N1 freeway. But that is precisely what has been built not far from the New Road offramp. Claire Cole paid a fascinating visit to the building with Alminic Construction, the company which built the church, and spoke to Reverend Hiegumen Philaret, who initiated and organised its construction.

The Russian Orthodox Church of Saint Sergius of Radonezh was designed in Russia according to centuries-old tradition, but it is the only one to be built south of the equator.

Modelled on the churches in St Petersburg, its cross-shaped plan hails back to the church design of very early Christianity.

Rev Philaret explains that early Christian churches either adopted the basilica-type plan, or the cross-shaped plan, with the Byzantine layout dating from several centuries later. He notes that the Russian Orthodox church is most similar to the Roman Catholic church in terms of its traditions – the two stem from the same origin and are extremely old branches of Christianity. To start with, the church is orientated in an east-west direction and set out according to that.

Russian Orthodox churches are designed on a cross-shaped plan -something which the Reverend notes has been lost in the design of many contemporary churches. The altar must be located on the east side, which is a strict requirement. This also used to be the case for Christian churches traditionally. Every element of the building is carefully created with a specific symbolism or tradition attached to it.

The building has five domes – something which Rev Philaret describes as “very Russian,” and a number which was popular in Russian church design between the 15the and 17the centuries.

The number of domes or cupolas on a church varies, with each combination symbolising something specific. One stands for Unity; three for the Holy Trinity; five for Christ and the four apostles; seven for the seven Sacraments (this has a strong relationship to Roman Catholic tradition); and 13 for Christ and the 12 apostles.

The shape of the ‘onion-domes’ is in itself symbolic of light, being representative of the flame on a candle.

Nine mosaic icons adorn the exterior of the building, also in accordance with tradition. These depict Christ the Saviour on the right of the altar and the Holy Virgin on the left – positions which they traditionally occupy. The other icons depict Saints Cyrill and Methodius, who in the ninth century organised the Slavonic alphabet and the translation of the Bible from Greek and Latin. They are prayed to as the teachers of Slavonic Christians.

The mosaics were done by the same Russian team which has been restoring the church of Christ the Saviour of the Blood in St Petersburg. This church dates from the 19the century, and is located on the place where Alexander the Second was killed. The whole church is covered in mosaic, which was restored using a 200-year old technique.

Inside, the church accommodates 400 people upstairs and down, working on a figure of two people per square metre. The Russian tradition is to stand, so there is no seating, although the church can hold 350 seats if necessary. The building has been carefully designed in terms of acoustics, as it is also tradition not to use microphones.

Based on thousands of years of tradition, the design had to consider how the sound reflects off the structure from where the priest stands.

Built in a tradition of craftsmanship

Alberto Fogolin and Vjeko Berkovic of Alminic Construction explain that although the church was designed in Russia, it had to conform with the locally available materials in South Africa. The basic structure is concrete, brick and mortar, with a steel roof structure, and the interior dome consisting of skim-coated plasterboard, as this is lighter than concrete. One of the most interesting aspects of construction was the detailing and putting together of the cupolas, which are copper-plated. The copper had to be insulated from the steel structure by timber profiles, to prevent an electrolytic reaction occurring between the two metals. “We used timber as an insulator because it is easy to shape,” says Fogolin. “It was profiled by a computer programme to be perfectly symmetrical.”

The copper tiles for the cupolas were hand-beaten to form the correct profile, and then covered in gold leaf. This work was done by Russian craftsman skilled in copper work and gold plating, who were brought out to South Africa to complete the work.

“The cupolas were built on the ground and lifted into position with a crane once finished,” Berkovic notes. This proved to be a tricky process, and the placing of the roofs was achieved by sending a man in a basket up on the end of the crane, holding the cupolas one by one, and placing them carefully into position, where they were bolted in place. This was made even trickier by the wind. The logistics of the operation also had to be carefully planned, to avoid hitting the cupolas already placed. The temporary roofs which had been used in place of the cupolas had to be removed, the cupolas placed in order and bolted in position, and finally, the cross had to be placed.

Much of the detailing on the interior of the church was also done by Russian craftsman. Gold leaf is used to decorate column capitals and other elements, for instance. The altar screen is emboya, carved by a 75-year old man who learned his craft in a World War II prison camp.

More than a building

The careful attention to detail and tradition stems from the importance of the church being “more than just a building,” as Rev Philaret puts it. There must be a richness in one’s experience of the building and its symbolism. “The church must lift people up, not just in religion but in culture, architecture, music,” he says. “The goal of each detail is to elevate.”