Patriarch of Alexandria and All Africa, Theodore II, lead his first Divine Liturgy at the Russian church in South Africa

On Sunday, October 11th, 2015 in the church of St. Sergius of Radonezh in Johannesburg, a celebration and festivities were held to commemorate the 1000-year anniversary of the repose of St Equal of the Apostles Great Prince Vladimir.

On this day the Divine Liturgy was conducted for the first time in the only Russian church in sub-Saharan Africa by Patriarch of Alexandria and All Africa, Theodoros II. The service was conducted together with the Archbishop of Johannesburg and Pretoria, Damaskinos; the rector of the Russian church, Archpriest Danil Lugovoy; the Serbian Archpriest Isailo Markovic, as well as the clergy of the Johannesburg diocese.

Patriarch Theodore II has repeatedly visited the church of St. Bergius of Radonezh, but during those times made either prayers or vespers service.

After the service, a prayer service was held for the holy St. Sergius of Radonezh, and St Equal of the Apostles Great Prince Vladimir with a cross procession.

After the service, His Beatitude gave a warm welcome to all the parishioners, congratulated all on the festivities and donated to the church an icon of St. George.

In response, Archpriest Danil Lugovoy thanked His Beatitude Patriarch for the greatest honour bestowed on the Russian church, congratulated the Primate of the Orthodox Church of Alexandria with the anniversary of the election to the Patriarchal throne and presented on behalf of the church a colourful album dedicated to the Tretyakov Gallery, as a symbol of spiritual and cultural heritage of Holy Russia; and an exclusive copy of the Tsar Bell, as a symbol of the revival of the Orthodox faith in the Slavic countries, united by a common faith, received from St. Vladimir in the Dnieper baptismal font.

Then His Beatitude visited the photo exhibition «Heritage of Holy Russia», thereafter in a tent on the territory of the church festive celebrations were held and the presentation of the booklet «Light of Orthodoxy», dedicated to the history of the Russian community in South Africa: the first Russian Parish in the name of the St Equal of the Apostles Great Prince Vladimir, «Russian House» and our Parish of St. Sergius of Radonezh.

His Beatitude Patriarch’s visit was preceded by all-night vigil, which was conducted by Archpriest Danil Lugovoy on Saturday October 10th, 2015. Father Danil was assisted by the rector of the Greek church in Pretoria Archimandrite Michael (Vizvinis) and the Romanian church rector, Archpriest Vasiliy Taty. The film, shot in 1970, “White Russian in South Africa” about Russian emigration was shown after the evening service.

The ceremony was attended by representatives and heads of diplomatic missions of Russia, Belarus, Azerbaijan, Greece, Serbia, numerous parishioners and guests of the church. 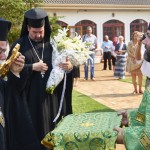 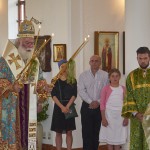 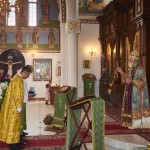 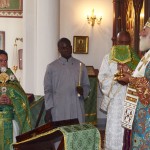 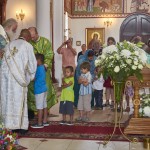 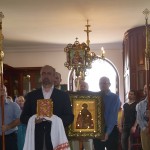 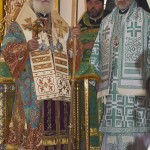 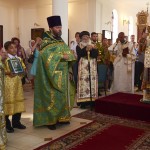 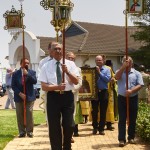 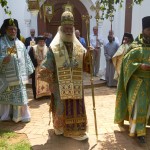 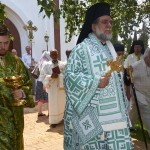 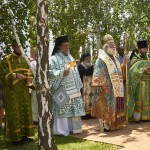 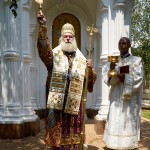 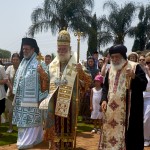 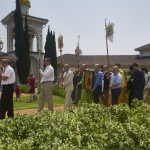 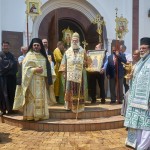 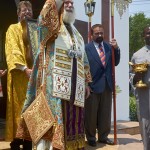 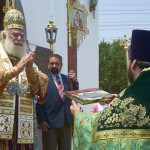 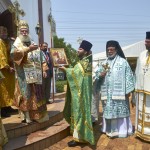 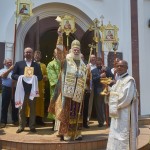 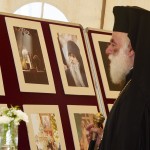 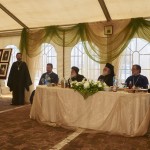 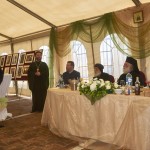 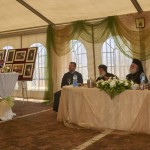