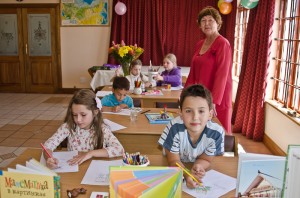 The church of St. Sergius of Radonezh opened their Sunday school at the start of the Great Lent in 2005.

The aims of the school are as follows: – the education of the children in Russian Orthodox traditions and their familiarisation with masterpieces of Russian literature, art and music, the preservation of the Russian language and the provision of an harmonious upbringing. Parents of children attending the school include citizens of Russia, Ukraine, Bulgaria and South Africa.

The following subjects are taught at the school: Orthodox Fundamentals, Choral singing, Art and the Mother tongue. The subjects are taught by expert teachers in an informal home environment. With great success, the learners of the school perform various Christmas and Easter concerts and take part in the organisation of various feasts, displays and other matters.

Familiarisation with church architecture and proper behaviour within the church is the main aim of Orthodox fundamental studies for the intermediate and the junior groups, as are the important feasts and celebrations of the Orthodox Church, the basis of the gospels and the attainment of Orthodox prayer. An incomplete mastery of the Russian language by some children does cause problems, and we are often required to explain in English.

We hope that, by the end of this course, the children will feel at home in any Orthodox Church, in the symbolism of church iconography, and have a good basic understanding of Orthodox culture and history.

More generalised discussions on everyday Orthodox life take place in the senior group. By analysing the various aspects of modern life, discussing the latest literature and movies, the group gains an understanding of the fundamentals of Christianity and the principles of Orthodox spirituality.

The study of the home language proceeds differently in each age group.

The senior group studies an abridged version of the Russian literature syllabus, which covers tales from the olden days to present-day authors.

Our main aim is to promote and inspire appreciation for our national literature among our youth. In the hope that they won’t be afraid to pick up the four volumes of “War and Peace”, or be able to quote from Eugene Onegin, to know the biography of F. M. Dostoevsky, to make them proud to be part of such glorious Russian culture. 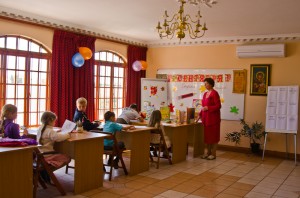 As a class we write minor essays on themes like “My Pushkin” after they have read the works of M. I. Tsvetaeva. Once a month we revise the basics of Russian grammar and punctuation. We are faced with catastrophically tight time constraints, and leaving out entire volumes and authors is regrettable but necessary: it is impossible to cover the entire span of Russian literature in a few hours a week.

We try to encourage our children to love and value Russian literature so that after completion of this course, they will be inspired to read new books by authors who are unknown to them, and, in the future, to read the stories of Pushkin and Aksakov to their own children. In this way, we hope to uphold Russian culture on the South African continent for years to come.

The intermediate group is taught how to read and write fluently. They read short poems by Zhukovsky, excerpts from the tales of Kuprin, short stories and tales by authors from the 19th and 20th centuries. We write short stories and then illustrate them. The kids enjoy tongue twisters, riddles and simple crosswords. They retell stories and tales with enthusiasm. If we have spare time at the end of the lesson the children ask to play educational games or read cards with difficult words (the names of plants, fungi, Russian cities).

The junior group is taught to read using the methods of Zaitsev: in other words we use rattling and jingling cubes with written syllables from which they can construct words, we later sing jingles with the same syllables. We teach writing by the trace book method. I can’t say that the work progresses quickly but we do see results. We read Russian folk tales and then re-enact them with the help of cardboard figures. The most popular tale is about the three bears; we have acted that one out several times. We try to learn very short poems that are easy to remember. The involvement of the children’s parents really pays off, especially in the junior group, – at least 30 minutes a week of home study gives good results, which is why we urge our dear parents to take an interest in their children’s studies.

We hope that all the children who attend our school will never forget the rich, beautiful and melodic Russian language and will let it be heard in their houses and in the houses of generations to come.

Art lessons at our Parish Sunday school began in March 2005. The classes are divided into 3 groups, based more on the children’s ability to speak Russian rather than their age. The course, which we developed to extend over two years, includes drawing, painting, sculpture, and appliqué work. Materials such as watercolors, gouache, chalk, and pastels are used. The curriculum includes an introduction to famous Russian artists of the 19th century, and to Russian architecture. 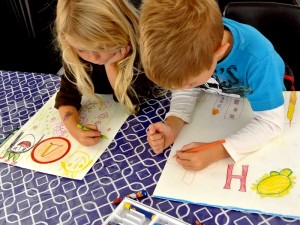 A number of successful lessons were devoted to Moscow and the Kremlin. The conclusion to these lessons was an exhibition dedicated to Moscow, where children who have never been to Russia drew pictures of the Kremlin, the Tsar bell, and the Tsar cannon.

Examples of folk art such as Hohloma pottery, Gzhel, Russian matrioshka dolls, as well as the elements of national dress and embroidery are explored.

In preparation for Christmas, the pupils sculpted figures and made posters and decorations for the Christmas play.

The theme of the Art lessons links to the subject of Russian literature, and the children produce illustrations of Russian folk-tales.

It’s a little early to speak of great advances, but the benefits of the art classes are clear; when a toddler who couldn’t speak a word of Russian before, on being asked to draw any round shape, produces a yellow circle and calls it “Kolobok” (a famous Russian folk-tale character).

Singing at Sunday school is a happy lesson for children. Also for their parents, since, by learning the text, the child increases his Russian vocabulary. Songs that are appropriate to the given holiday accompany plays acted out by the children on the festive days of Christmas and Easter. Also, at singing classes, they sing songs from the cartoon movies that they know. 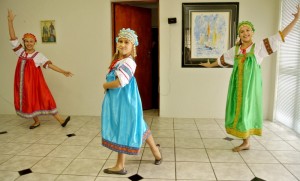 An important part of these lessons is the memorizing of the notes of the musical stave. It is important that children should be able to read music and “to hear”, i.e. recognize a melody. It’s like an alphabet, only in musical notation; needed when learning to play a musical instrument, or in singing. The musical alphabet promotes and strengthens the imagination of the child about sounds and develops an ear for music. All this enhances the harmonious development of the child.