The Rector of the Russian Orthodox Church of St. Sergius of Radonezh delivers a requiem service at the grave of a Russian officer

On the 25th of February 2014, the rector of the Russian Orthodox Church in Johannesburg – Father Danil Lugovoy delivered a requiem service at the grave of a Russian officer, Leo Pokrovsky, in the town of Utrecht. The town is situated 400km from Pretoria, the capital of South Africa in the province of Kwa-Zulu Natal.
Leo Pokrovsky was mortally wounded by a British sniper on the 25th December in 1900 during the Anglo-Boer war. After 25 years he was reburied in the Dutch Reformed Church in the town of Utrecht. Subsequently after the burial, a monument was erected over the grave topped by a stone statue of the deceased. “He voluntarily gave his life for the oppressed people”, was written on the pedestal.
It was the first time since the day of his death that Orthodox prayers were pronounced by the deceased’s grave. On behalf of the Embassy of the Russian Federation in the Republic of South Africa and Russian military attaché office, flowers were laid at the foot of the grave. The Minister-Counsellor of the Russian Embassy, Andrey Merkulov and the Russian Military Attaché in South Africa, Nikolai Pushistov were present at the commemorative ceremony. Likewise staff of the Utrecht museum and other representatives of the town authorities were present.
Adjacent to the Utrecht museum there stands a wall of remembrance, for those who took part in the Anglo-Boer war. The wall has names of approximately 90 Russians who fought alongside the Boers. Among them Prince Bagration of Mukhrani and Earls Bobrinskiy, Kaneckiy and Komarovskiy. According to reports, some 225 Russian soldiers, officers and immigrants participated in the war. A section of the Russian Red Cross also assisted during the war. One of the more decorated, outstanding and courageous military commanders was Yevgeny Maximov, who served his way up to the rank of General of the Boer army.
During October last year, Archbishop Mark of Egoryevsk, Head of the Moscow Patriarchate in foreign institutions – consecrated a chapel in the name of Saint Prince Vladimir, which was erected at the church of St. Sergius of Radonezh in Johannesburg. The chapel stands in memory of Russian soldiers that were killed in the Anglo-Boer war. 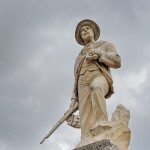 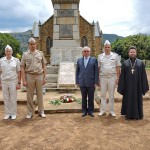 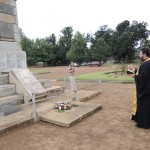 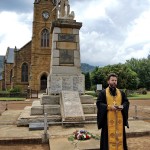