Victory Day celebrations in the South of Africa

On the 12th May, the 2nd after EasterApostle Thomas’s Sunday , there were Victory Day celebrations in the church of St. Sergius of Radonezh.

After the Divine Liturgy had concluded, the current priest of the church and its congregation, Rev. Danil Lugovoy conducted a prayer of thankfulness to Lord God for allowing our country victory during the Great Patriotic War. On behalf of the people present on this historic day of remembrance, Father Danil paid a warm tribute to the veterans of this Great Patriotic War. Namely Valentin Pavlovich Arinin and Celia Abramovna Maiburd were honoured and congratulated, on behalf of all the people present Father Danil presented them with a bouquet of flowers and memorable presents.

On behalf of the Embassy of the Russian Federation, on the territory of the church a reception was held to commemorate Victory Day. Before the reception commenced, the congregation present on the day was greeted and welcomed by the Extraordinary and Plenipotentiary Ambassador of Russia in South Africa, as well as military Attache Nikolai Viktorovich Pushishtov. The veterans also shared their personal experiences and memories with the members of the reception.

Learners and teachers of the school at the Russian Embassy prepared a performance for the audience. On behalf of the congregation, Elena Yurievna and Anastasia Rakityansky performed a literary-musical composition for the audience.

The celebration came to a conclusion with a celebratory feast in the church hall. 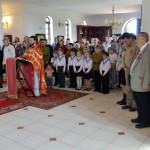 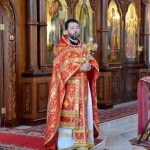 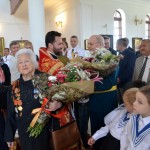 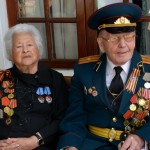 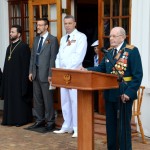 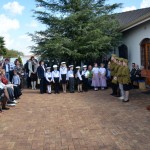 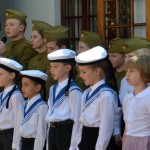